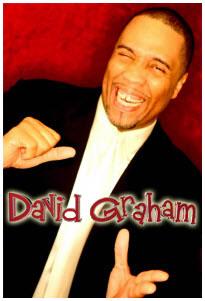 "I make a living from doing the thing I used to get beatings for." – David Graham

National Standup Comedian - David Graham, a 19 year stage veteran, has worked with stars like Chris Rock, Adam Sandler, and Sinbad. He has appeared in the movies APOCALYPSE, BEAUTY QUEEN and Tapestry of Shadows. As well as recently appeared on “The tonight Show with Jay Leno”

David’s 1992 stage debut was a reluctant “Open-Mike” appearance at the Funny Bone Comedy Club in St. Louis, MO. It just happened to be a contest. He just happened to win. He was hooked. His brand of physical, high-energy comedy led him to appear on the ABC- TV series “America’s Funniest People”, and later on Comedy Central’s “Comic Justice”, NBC's "Last Comic Standing”. He is currently touring coast to coast and will be appearing on BET’s “Comic-View” in the upcoming season.

David Graham, a six-foot-six teddy bear, will take any event to the next level. David is a clean comedian who hits those hard-to-reach areas of the comedic nervous system. From family discipline to a spell-binding Temptations review with David doing all four-part harmony acappella, it is thievery definition of a "show".

With a head the size of a small SUV, David has developed over three hours of family-friendly comedy material. He even adds keen improvisation for event-specific performances.

David Graham's comedy career has been a non-stop series of events. His very first time on stage was at the Funny Bone Comedy Club in St. Louis, where he unknowingly entered a comedy competition (which he won). The contest win led to the opportunity to open for comedian George Wallace. Graham's twelve-minute set attracted positive press that led to a permanent emcee job at that club. Opening for headliners such as Chris Rock, Adam Sandier, David Spade, Jimmy Walker, Sinbad and a host of others took… Show more his act to an all new level and helped get David noticed by national television. Now, he's a nationally-touring headlining comedian.