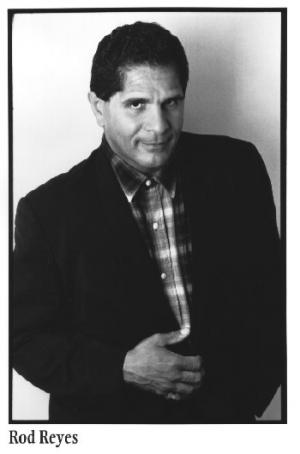 Rod Reyes first stepped onto a comedy stage twenty-three years ago at the Boston Comedy Club.  Since then, he has developed a sophisticated act characterized by a wealth of eclectic subject matter, sharp political and topical observations, accurate foreign accents, and a flair for non verbal comedy.  Rod went from open mike to closing act in five years, and to bring his career full circle, produced some of the most successful shows at the very same Boston Comedy Club.

Rod began his career writing for his brother, the late, great Rick Aviles.  Together they created an outstanding act which culminated in Rick’s HBO One Night Stand taping.  Rod wrote and appeared in the introduction to that show.  When Rick passed away, Rod incorporated some of Rick’s signature routines into his own act.  “When you saw Rick, you saw me.  Now, when you see me, you see him.  Two acts for the price of one” he proudly states.

While his growth as a comic continues to be his immediate focus, Rod also has a passion for writing and for music.  As of now, he has completed four full length screenplays, as well as numerous sketches he performed with the talented sketch groups Nuyorican Rule and Tuxedo Crossing.  He has also created Gerry A. Trixxx, the world’s first senior citizen rap artist, and is currently shopping a demo CD to the industry.

Born in NYC, raised in the tough Al Smith Houses, Rod was exposed by his parents to a wealth of fine and lively arts, from Shakespeare in the Park to numerous Broadway shows.  He went to his first jazz club at 15, and went often to the Met and MoMA.  Rod attended N.Y.U. on a fencing scholarship.  Today, his enjoys pick-up basketball, weight training, and mountain biking.  He can also ride a horse “pretty well for a city boy”, preferring the English saddle.

While Rod has moved quickly in his development as a comic, his work ethic remains strong.  Diligent and disciplined, he is constantly pushing himself to learn new things and apply new techniques.  It’s easy to believe the best of Rod is yet to come.  Oh, and by the way, Rod is currently 63.  He is proud of his age and his experience.  But, if you come expecting an old man with yesterday’s perspectives, he warns that you will be seriously disappointed.  “I’m not your grandfather’s version of 63” he says.  His many college fans would agree, but you are invited to see for yourself!