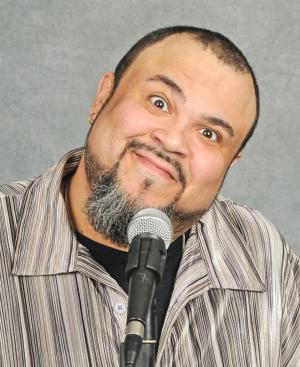 EVERYONE loves a Success Story. Squishy definitely qualifies as a bona fide success story.
Squishy is one of eight children. He is the son of an Irish/German Mother and an African/American Father.

Squishy's Grandfather was a "Knight of the KKK" and his Dad was a member of the "Black Panther Party."
Funny is in his genes/jeans...!

Being Multiracial in the 70's & 80's was difficult. Neither race accepted him. Squishy was an outsider.

This inability to "Fit In" lead Squishy to become a high school dropout, alcoholic, crack & meth addict
and was incarcerated for a brief period.

Squishy eventually obtained his G.E.D., then graduated from Washburn University, with a
Bachelor's Degree in Psychology. 2 years later, Squishy received his Master's Degree from the University of Kansas. He was honored to be a keynote speaker at Harvard University in April 2000.

During the night, Squishy performs at over 20 National Comedy Clubs.

Squishy's Performance is rated a PG-13 with some Adult content.
Mature topics but not offensive.